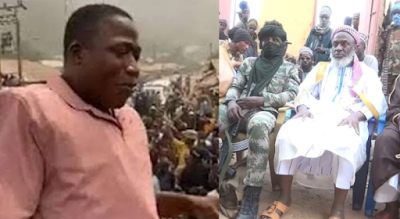 Bello said this on Twitter while reacting to the criticisms levelled against Gumi who has been meeting with bandits and calling on government to address their grievances.

The former President’s grandson described Gumi’s intervention as grossly misunderstood, adding that what he was doing could improve the insecurity in the country.

Bello tweeted, “When Sheikh Gumi started his mission, someone told me that the man is likely to be misunderstood. It is happening already. The man may be wrong in his approach, but he started it as a means of intervention, after tired of simply being a critic of the govt and the situation.

“Instead of being seen as a brave cleric facing these criminals face to face, Sheikh Gumi is seen, by those who misunderstood, as either the northern interest, government agent and sometimes even as criminal himself.

“He is just a volunteer working on his own. Yes, you can compare Sunday Igoho with Sheikh Gumi in the sense that they are intervening. However, while Sheikh is calling for peace, Sunday is calling for war. The sheikh is not inciting anyone unlike Sunday openly.”

However, Bello’s comment attracted mostly negative comments from many who said it was wrong to compare the two.

They argued that while Igboho was fighting bandits, Gumi was negotiating and fraternising with the killers.

“One is defending his people… The other is negotiating with terrorists with RPG… #Nonsense”, tweeted @amirahassanisa1.

@Al_mustaphar tweeted, “Your tweet has no sense, he is romanticising with terrorists and you feel he is brave for that? How is he so always able to get where they are situated? Why not share their location with security agencies rather than toasting them? Sometimes I wonder how you all reason.”

@luvlygbengaakin also responded, “Is Igboho negotiating with killers and destroyers? He is fighting criminals.”