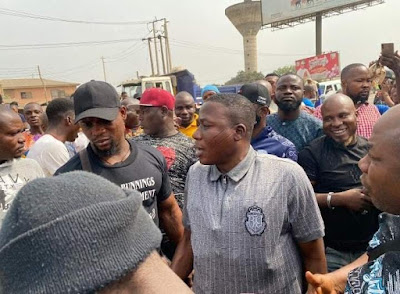 Sunday Adeyemo, popularly known as Sunday Igboho, has denied receiving any money from President Muhammadu Buhari through the Ooni of Ife.

Igboho had on Tuesday claimed that the Ooni of Ife, along with other Yoruba leaders, were going behind to collect dollars from the presidency and had failed in speaking truth to power.

He has, however, apologised but denied claims that he is working for some politicians.

The activist, while making the denial, insisted that leaders in the South West must speak up against evil.

“When the Ooni visited President Muhammadu Buhari, some said he went to receive money on my behalf and that is a blatant lie,” he said in a viral video.

“I didn’t receive money from anybody, I am not working for any politician, it is for the love of the Yoruba Nation,” he said.

Recall that Igboho recently rose up with a seven-day ultimatum to the Fulani community in Igangan, a town in Ibarapa Local Government Area of Oyo State to vacate the area.

He made good his threat to evict the Fulani when he gathered hundreds of his supporters, stormed Igangan and confronted the Seriki Fulani.

He had vowed that all killer-herdsmen will be evicted from all parts of Yoruba land.

Igboho stormed the state after the residents of Yewa, Abeokuta North, Odeda and some parts of Ijebu decried what they termed the inability of the Abiodun-led government to tame the killer herdsmen.