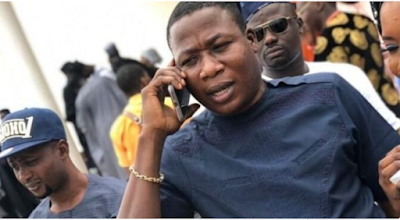 A fundraiser set up on Gofundme to help support Yoruba rights activist, Chief Sunday Adeyemo, also known as Sunday Igboho, has raked in £31,470(N16.4m) as of the time of filing this report.

The fundraiser with a target of N52.3m was organised by Maureen Badejo days after Igboho issued an ultimatum for Fulani herdsmen to vacate Oyo State.

The ultimatum was issued by the activist over the kidnappings, killings, maimings and rape allegedly committed by the herdsmen in Oyo State.

Igboho has since taken his campaign against herdsmen to neighbouring Ogun State where he was welcomed by a crowd of supporters.

To support his cause, Badejo created the Gofundme account, which has seen donations from Yoruba people in the diaspora, to help purchase buses to assist Igboho whom he believes will secure Yoruba land.

“They need buses to move around to secure our ancestral land. Our security is threatened as we speak. seems people in a position of authority are helpless,” a quote on the account said.

One Kehinde Akinboyewa who donated £250, said, “No cause can be more just than this battle for the soul of the Yoruba Nation. Strong message to the Fulani terrorists and their enablers in high places, that though we’re thousands of miles away from home, we’ll stand shoulder to shoulder with our brothers and sisters in Yoruba land. The push back has begun in earnest; wanting to live in peace in your own home can’t be asking for too much!”

Fatai Adegbenga Kazeem who supported the cause with £20, said, “It is a just cause for all the Yoruba (people) home and abroad. Enough is enough. Our land must be safe for all again.”

However, Igboho who in an interview concerning the donation, said, “I don’t need such and there is nothing like that.”