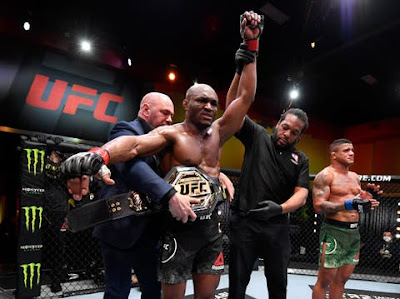 UFC welterweight champion, Kamaru Usman, has called out Jorge Masvidal for a repeat of their 2020 title fight after dispatching former teammate Gilbert Burns in the third round of their UFC 258 bout on Sunday.

Usman bounced back from an early first round scare to floor Burns with a heavy right jab that stunned the Brazilian, before raining down punches on his former teammate.

Burns had dropped Usman with a short punch within a minute of the fight, but the Nigerian Nightmare recovered despite the flurry of punches from the well-conditioned Burns.

Usman defeated Masvidal to retain his title in 2020 and wants a rematch after the American had stated that he took the fight on a six-day notice and with a broken nose.

“They tried to make that fight but he kept backing out. The only reason this man took the fight is because it was on six days notice and he had a built-in excuse. And he’s still running his mouth talking.

“Guess what? It’s not done. I’ll give you a whole training camp. I guarantee you won’t sign on that dotted line because this time I’m going to finish your a***.”