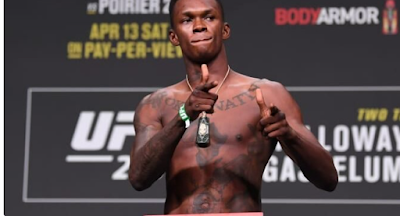 Nigeria’s Israel Adesanya has been moved up to the light heavyweight division and will challenge Jan Blachowicz of Poland for the belt at UFC 259.

The fight between the no. 3 overall in UFC’s pound-for-pound rankings and Blachowicz is scheduled to take place on March 6.

Adesanya will be challenging Blachowicz for the UFC light heavyweight championship and will be moving up from the 186 to 205 lb weight division for the Polish professional mixed martial artist’s first title defense.

Adesanya has held the middleweight title since April 2019 with one unification bout victory and two successful defenses.

Blachowicz is no. 15 in UFC’s pound-for-pound rankings but has an impressive resume himself.

Adesanya is 20-0 with 15 knockouts and at the top of his game, having taken down Robert Whittaker, Yoel Romero, Anderson Silva, Derek Brunson and Kelvin Gastelum in recent bouts.

This will also be his first bout since September when he defeated Paulo Costa in his second title defense since unifying the middleweight belt.

Adesanya could be on the verge of making history by holding two belts at once and cementing his status as one of MMA’s most fearsome fighters.