Stakeholders meeting of Kwara state chapter of the All Progressives Congress (APC) held in Ilorin, the state capital ahead of the next week Tuesday commencement of the party membership registration exercise in the state on Wednesday, ended abruptly as violence marred the excercise. 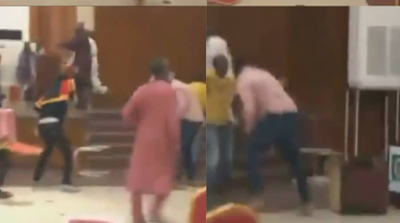 No fewer than ten members of the party sustained serious injuries while the crisis lasted.

The meeting which was held at the Banquet Hall, Government House, Ilorin was initiated by the National Re-validation/Registration Membership committee of the party led by Senator John Adonoi.

Recall that on Tuesday, the faction loyal to the removed state Chairman, Hon Bashir Bolarinwa protested on the streets of Ilorin over allegations that the new chairman, Alh Sanmari Abdullahi wanted to manipulate the exercise.

The Chairman Caretaker Committee, Alh Sanmari while receiving the APC Committee from Abuja also appealed that all members and new ones should be duly registered, and not disenfranchised. The seven-man committee led by Senator Adonoi arrived Ilorin,  the state capital on Monday for the exercise and fixed Wednesday for meeting with the stakeholders.

Upon arrival, the chairman, Senator Adonoi said that it has received 187,200 booklets from the party in Abuja for the exercise.

During the melee, iron chairs and other valuable materials in the hall were freely used by the aggrieved members of the opposing camps who freely attacked one another. The crowded banquet hall soon became virtually empty as members vacated the venue and ran away for safety.

It was reliably gathered that factions in the party sharply disagreed over selected members who were being screened by the security operatives at the gate to enter the main hall for the stakeholders’ meeting. The shouting on the security operatives at the entrance soon became intense and the aggrieved party members later forced themselves into the hall.