VIDEO: Driver trying to escape a LASTMA official, hits a policeman off bridge in Lagos » Bazefor9ja.ComBazefor9ja.Com

Home » VIDEO: Driver trying to escape a LASTMA official, hits a policeman off bridge in Lagos 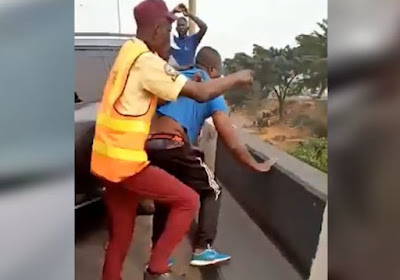 A vidEO of a driver tipping a policeman over a bridge in Lagos while trying to evade arrest for allegedly driving against traffic has surfaced online and gone viral.

In The less than one-minute footage, officials of the Lagos State Traffic Management Authority (LASTMA) could be seen asking the yet-to-be-identified driver to stop but he refused.

Operatives of the Nigeria Police Force (NPF) could also be seen telling the driver to come down from His vehicle but he seemingly turned a deaf hear to their directives.

In The process of trying to evade arrest, the driver knocked one of the policemen standing at the back of His vehicle off the bridge into a nearby carnal.

Trending
Kagara abduction: We are not ready to pay ransom, but we are making effort – Niger govt

Rankled by His action, the policemen forcefully brought the ostensibly shocked driver out of His vehicle and wHisked him Inside a van stationed at the scene.

The moment a man trying to escape suspected LASTMA official hit one off of a bridgepic.twitter.com/DOjs3FfrUJ

Giving an update on the incident, Jubril Gawat, the media aide to Babajide Sanwo-Olu, governor of Lagos, said the police officer broke His arm and remains in a critical condition.

He also dismissed claims that the officer is dead.