VIDEO: Man dumps wife after her mother denied him access to children for not greeting her » Bazefor9ja.ComBazefor9ja.Com

Home » News » VIDEO: Man dumps wife after her mother denied him access to children for not greeting her 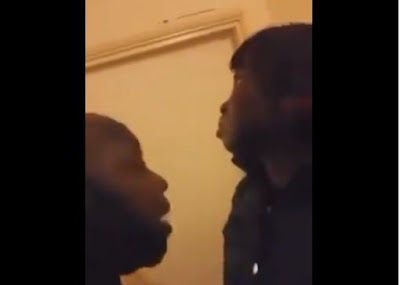 A Nigerian man has broken up with his wife after her mother denied him access to their three kids because he didn’t visit her house to greet her.

In a now-viral video, believed to be filmed abroad, the visibly rankled man could be seen preparing to leave the house despite entreaties from his wife.

He asked his wife how many times she has called his own mother that hers should penalise him for not greeting her.

It, however, appeared that the man’s action was fuelled by other unresolved issues between the pair.

In the short video, the man said he has decided to call time on the marriage having endure his wife’s shortcomings for long.

He recounted how his wife had invited the police to arrest him and thereafter took him to court.

The man also called out his wife for asking him to calm down, adding that she has been saying the same thing for years without turning a new leaf.

He vowed to ensure he conducts a DNA test on Samson, one of their kids, to ascertain his actual father, alleging that his wife once told a nurse that the child does not belong to him.

He, however, said he would continue to provide support for the children.