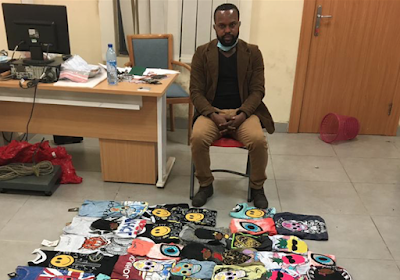 Onyekachi was nabbed with 3.30 kilograms of the illicit drug during the inward clearance of passengers on Ethiopian Airlines at the E arrival hall of the MMIA.

He said, “the hard drug was cleverly concealed in T-shirts stickers but he couldn’t escape the eagle eyes of our detectives”.

This development is coming a week after Mohammed Buba Marwa, NDLEA chairman, gave commanders of the agency and special commands marching orders to mop up illicit drugs across the country.

The agency said its operatives at the FCT command raided a number of drug spots in Abuja, where 14 persons including three men in military uniform suspected to be fake soldiers were arrested and different quantities of cocaine, codeine, rohypnol and Indian hemp were recovered.

Some of the drug spots raided at the weekend include Wuse Zone 4 and 5; Wuse by Banex plaza and Garki by Torabora.

According to Lawan Hammisu, FCT commander of the agency, the persons arrested are being investigated in connection with the recovery of 34.8kg cannabis sativa.

“Also seized were other quantities of Cocaine, Codeine and Rohypnols. Three of the arrested persons who were in military camouflage are still being profiled but are suspected to be fake soldiers,” he said.

The agency said its Nasarawa command also uncovered a cannabis warehouse in Lafia, the state capital, where 45 bags of the illegal drug weighing 474kg were recovered.