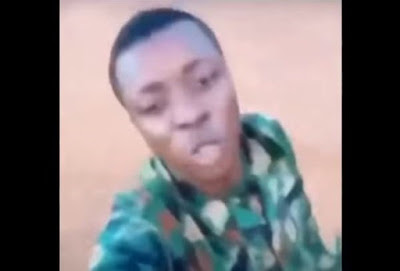 A video wherein a man clad in military uniform could be seen issuing out a stern warning to officers of the Special Anti-robbery Squad (SARS) has surfaced online and gone viral.

In the less than 30-second video, the man threatened to go after SARS operatives the day they mistakenly kill any “yahoo soldier” the way they do to “young Nigerians” over internet fraud.

He also claimed that soldiers indulge in the practice.

“SARS, una dey kill yahoo boys up and down, the day wey una go kill Yahoo soldier. As in the you will mistakenly kill yahoo soldier, that day una don find job. You will know that day that yahoo go vex because soldier too dey do yahoo,” he could he heard speaking in Pidgin.

It remains unclear if the man was indeed an officer of the Nigerian army or not.

The development comes at about the same time when SARS operatives were said to have killed a yet-to-be-identified man in Port Harcourt, Rivers state, on Sunday.

In a clip making the rounds on social media, the man — believed to be dead — was seen lying by the roadside.

A voice could also be heard in the video saying: “they don shoot am.”

Several Nigerians have since taken to social media platforms, especially on Twitter, to condemn the killing.

Using the hashtag #EndSARS, they also demanded that the perpetrators of the act be brought to book while also decrying the continuous harassment of young Nigerians by the security agency.

“The situation is pathetic, you cannot reform or carry out orientation effectively, they should be sent to the Army then scrap the unit. Port-Harcourt has lost another person,” a Twitter user wrote.

The situation is pathetic, you cannot reform or carry out orientation effectively, they should be sent to the Army then scrap the unit. Port-Harcourt has lost another person.#phtwittercommunity#EndSARS pic.twitter.com/B6yG4BtzQM