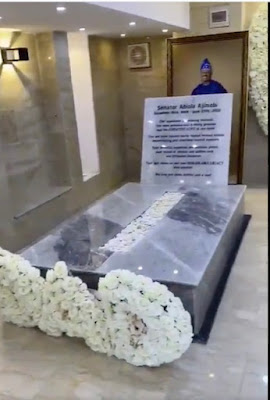 Former Oyo governor Abiola Ajimobi is really resting in peace and luxury in his Ibadan home where he was buried on 28 June.
The mini mausoleum is now trending on Twitter after a video of the place leaked online.
The resting place is remarkable for its luxury, with the tomb, floor and walls all made with marble.
There is air conditioning unit in the well-lit room and exotic chairs, may be for either the dead or visitors.
There is also a life portrait of the dead politician.
The designer appears to have tourists in mind.
London based Toprouser, who first shared the video commented on the chairs in the mausoleum: “The chair, see your people. Only the rich will die well”.
Wale Gates who also published the video said sarcastically: ‘Very humble burial of The Constituted Authority Ajimobi Himself… Na jacuzzi remain’
Ajimobi, former MD of defunct National Oil, was born on 16 December in 1949. He died 25 June at First Cardiology Consultants, in Lagos of COVID-19 complications.
He was a two-term governor of Oyo state, between 2011 and 2019. He was also a senator between 2003 and 2007.