Home » We have no control over kidnaps, bandit attacks – Niger State Gov, Bello 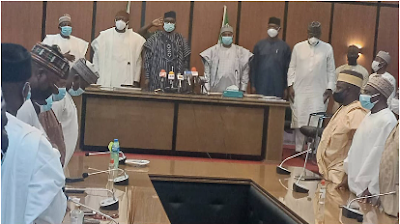 The Niger State Governor, Alh Abubakar Sani Bello has said state governors have no powers to tackle the menace of kidnapping and banditry ravaging the country.

He said the states have no control of the Army, Navy, Air Force and even, the Police in combating the challenges.

Bello, who disclosed this when he played host to five state governors in Minna, called for synergy between the federal and state governments to save the nation.

According to Bello who hosted Governor Aminu Tambuwal of Sokoto, Kayode Fayemi of Ekiti, Abdulrahman Abdulrasaq of Kwara, Abdulahi Sule of Nasarawa, and Simon Lalong of Plateau state, this could be achieved through an adequate intelligence report that would help proffer a lasting solution to the challenge.

He said, “We need to impose on the authority to do the needful. Aware that we as state governors have limitations when, it comes to control of the Army, Navy, Air Force and even, the Police. There is a need for federal authority to work with state governments for immediate action on this menace.”

The governor further said the recent developments of the kidnap of the NSTA bus passengers and students in the state have brought the issue to the front burner.

Recalling how a similar situation occurred in Katsina State, he warned, “your Excellencies, with the recent development, if nothing is done, only God knows where next it will be.”

Earlier, the Ekiti State Governor, Kayode Fayemi said they were in Niger to give moral support to the state in the face of challenges confronting it.

He stated that those behind the acts are out to destroy Nigeria while urging Nigerians to remain united in fighting back to save the nation from the plans of the masterminds.

Fayemi then assured Governor Bello and the people of the state of the commitment of the 36 governors to stand with it, until the challenges are resolved.