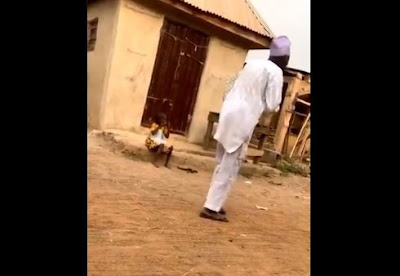 A video of an evangelist listing common deceptive words and phrases used by parties involved in a relationship has surfaced online and gone viral.

In the short footage, the preacher, who appears to be operating along Sango axis of Ogun state, could be seen sensitising the public against falling prey to such a relationship.

Video of the year! 😂 pic.twitter.com/PNAT4jQVJ4

‘Lori iro’ is a Yoruba phrase which means  “on top lies” in English.

The video, which comes days before this year’s Valentine’s Day, has begun to ignite mixed reactions on social media platforms, with many reflecting on all the common relationship lies addressed by the preacher.

Some Twitter users also jumped on the trend to comment on other deceptive phrases generally used by people including politicians.

“APC in 2015: Buhari will handle security while Osinbajo will handle economy. Lori Iro,” a user wrote.

Here’s is what some Nigerians had to say:

Babe you know i love you so much…

“This course you are studying, you can use it to work anywhere”

“I will end Boko Haram in 6months” lori iro

“I will reduce fuel price to N45/litre” lori iro

I see my future with you. Lori iro pic.twitter.com/UMUUVnRHJm

My Dad: when I was in school, I was always the 1st in my class. You’re not serious at all.

I’m currently at work,and the only thing ringing in my head is “Lori iro” 😂😂

Iyawo oremi… Lori Iro
Schl mum and schl dad… Lori Iro
Na me get am… Lori Iro
You’re the only one that matters to me… Lori Iro
Momma said to me…. Lori Iro
😂😂😂😂💔💔 pic.twitter.com/ImU5stNBmo

Trending:- BVN with NIN
Sincerely this Govt, are too senseless, as e dey do me like this if una start, I go start dey save my money back for “KOlO”..
I no get time for Lori iro😑 pic.twitter.com/rNQ1tVqXl0

Sorry for not replying all your messages, I was busy.
Lori iro.